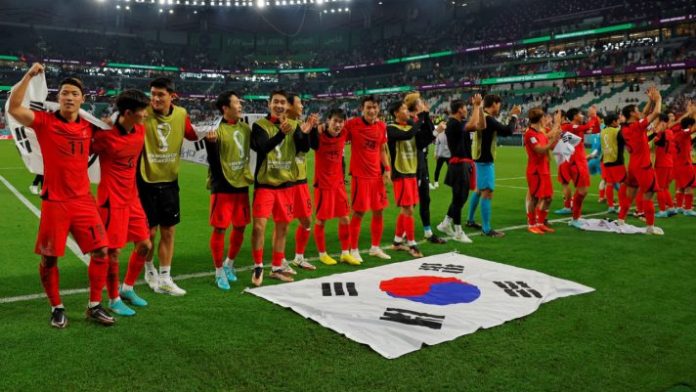 South Korea secured passage out of Group H and into the knockout stage with a dramatic stoppage-time goal by Hwang Hee-chan to defeat Portugal, 2-1.
Tottenham star, Son Heung-min did the lion’s share of the work, setting up the fortune-reversing goal, driving the length of the field and taking on three defenders before slipping a pass to Hwang.

Prior to the goal, the Koreans sat in fourth place in the live group standings. The 2-1 victory tied them with Uruguay with four points and with each having a net-zero goal differential. South Korea, though, advanced by winning the goals-scored tiebreaker, 4-2.

On Thursday, Germany was sent packing after the combination of a controversial Japan goal and a suspiciously lackadaisical Spain effort put the Germans on the wrong end of the Group E tiebreaker. Earlier Thursday, world No. 2 Belgium was bounced from the tournament after squandering several opportunities to score in a 0-0 draw against Croatia to close play in Group F.