HomeSportsThe World Cup break may have come just in time to save...
SportsFeatured 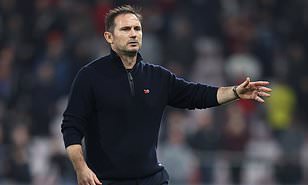 Everton owner Moshiri has his finger poised on the trigger after the side’s humbling defeat at Bournemouth… but the World Cup break may have come just in time to save sinking Lampard from the sack.

Frank Lampard insisted he would go back to the drawing board, knuckle down in training and that the World Cup break was the perfect time for cooler heads to prevail at Everton.

It all felt rather like the captain of the Titanic announcing plans for his new deckchair arrangement.

The truth is that Lampard is now under massive pressure, that Everton are sinking and their dismal form has been so bad that the goodwill he accumulated from fans in their fight for survival last season has evaporated.

That was evident in the away end’s furious reaction to their second thrashing at the hands of Bournemouth in the space of five days, as Marcus Tavernier, Kieffer Moore and Jaidon Anthony took the aggregate score for last week to 7-1 in the Cherries’ favour.

Worse still for Lampard, the notoriously trigger-happy Farhad Moshiri now has six weeks in which to make a managerial change. But Lampard insisted: ‘This is a long season, we are 15 games in and it is not the worst thing for us all to take stock and come away from it a bit.

‘It would have been really nice to go off on a positive note, but we have got a lot more games to think about.

‘It’s a good moment to reflect on what’s been good and not so good, where we want to get to and how we are going to get there. It will be a chance to get some more clarity on those points.’

Unfortunately for Lampard, reflecting on what has been not so good may take up most of the next month and a half.

His side are struggling to score goals — they have 11 from 15 league games this season — and when they go behind it is almost always game over. Despite conceding first in nine games in all competitions, they have fought back for a result in just two of them.

The early-season solidity that came with summer arrivals James Tarkowski and Conor Coady is now gone too, although those keen on underlying data will not be surprised.

The impressive form of goalkeeper Jordan Pickford has meant Everton have conceded eight goals less than their ‘expected goals against’ — the biggest discrepancy in the division. Pickford was badly at fault for the first of the three goals on Saturday though, a worrying sign for Gareth Southgate on the eve of Qatar, as he fumbled an easy save straight to Tavernier.

Lampard tried to ease any World Cup anxieties, saying: ‘Jordan’s amazing and he’s made incredible saves for us since I’ve been here. There’s a reason why Gareth and I trust him so much.’

He was philosophical, too, about his own team’s alarming slide to just one point above the bottom three.

‘We were in a relegation battle for a reason last year,’ Lampard said. ‘Maybe one transfer window where we lost a big player (Richarlison, to Tottenham) isn’t going to put us in the position where we’re fine now. The Premier League doesn’t work that way.

‘All I read pre-season was, “Everton are in this battle.” I was favourite to be sacked first — five managers have gone now — but that’s the nature of the beast. We have to keep working because the picture changes quickly. Two weeks ago people were talking about the top half.

‘When you do this job you have to be ready for everything. When you win it gives you a good feeling, you go out for dinner and you are happy. A loss you don’t, you stay indoors.’

Bad news then for Merseyside’s restaurant industry. Lampard has won just 27 per cent of his 33 Premier League games in charge.

This latest loss was as emphatic as any of them. Bournemouth were excellent, marrying grit and guile, and deserved their win.

If Lampard may be on his way out it seems Marcelo Bielsa is on his way in on the south coast. That is no slight on caretaker manager Gary O’Neil, who has done his reputation the world of good in the last three months by lifting Bournemouth from rock bottom to mid-table.

O’Neil hinted his time at the club was over on Saturday and that the appointment of Bielsa would have his approval. He said: ‘I don’t want to comment on things that haven’t been confirmed by the club yet. I am in constant dialogue with them.

‘I have huge respect for Marcelo Bielsa, what he has achieved, his reputation and the work he has done. If he were to come to Bournemouth I’m sure he would do a great job.

‘The noise should be about the lads. I’m comfortable with where I am, I’m in control of my future. You live and die by the decisions you make.’