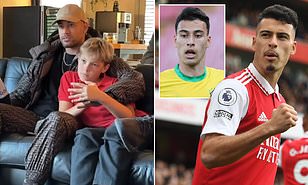 The Arsenal youngster, alongside teammate Gabriel Jesus, both beat established Brazilian forward Roberto Firmino to secure a place in Tite’s 26-man squad which was announced on Monday.

During the announcement, the 21-year-old’s inclusion seemed to be met with surprise from compatriot, Neymar, who seemed to raise his eyes when Martinelli’s name was read out during a live television announcement.

Neymar, meanwhile, filmed himself watching the announcement live with family and friends and nodded his head when Jesus’ name was read out on the television.

But when Martinelli’s name was read out the PSG forward’s reaction was interesting to say the least.

The Arsenal left-winger has just three senior caps for his nation, playing just 81 minutes across three games for the Selecao, making his senior debut in a friendly against Japan back in June.

Having also amassed only three caps for the U23 side, Martinelli does lack some international experience, but it seems the Brazil boss is ready to bring the young-star into the fold after a rip-roaring few seasons with the Gunners.

After joining the club back in 2019, Martinelli has become a favourite at the Emirates, yielding five goals and two assists in 13 Premier League appearances already this season.

While he perhaps deserves a call-up following his fine form, Neymar’s ‘shocked’ reaction was something to note and perhaps could signal that the pressure is now on the Brazil superstar.

Some fans have taken to Twitter to voice their opinion’s on what Neymar’s reaction means, with the former Brazil captain then showing his elation with his family at the inclusion of his own name on the list.

One fan wrote on Twitter: ‘Neymar’s reaction to Tite’s call up. You can tell he was happy for Gabriel Jesus & surprised about Martinelli.’

‘His face when they said Martinelli,’ another added.

Other Twitter users questioned whether Neymar’s reaction was one of concern as Martinelli, who like the PSG super star also plays on the left-wing, could look to usurp the former Brazil captain in the coming years.

Notable omissions to the Brazil squad include Phillippe Coutinho, who was ruled out this week with an injury, Firmino who has not played for Brazil since last year and Arsenal defender Gabriel.