The University College Hospital (UCH) Ibadan has successfully delivered its first set of triplets via an In Vitro Fertilization procedure in the hospital. 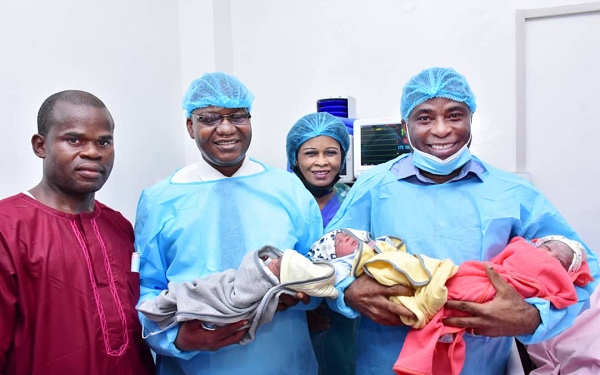 The delivery of the babies lasted 45-minutes. Hospital authorities say the mother and the babies, all females, are in good condition. The babies weighed 1.4kg, 2.5kg, and 2.4kg respectively.

The father, Dr. Kehinde Osiki of the Department of History and Strategic Studies at the University of Lagos, could not hold back his excitement as he witnessed the birth of his children.

He pointed out that Technology has brought relief to problems often attributed to spirituality, saying that instead of people carrying the burden of superstition, they should rather seek scientific solutions to problems.

‘’He encouraged married couples who could not fertilise not to lose hope as solutions abound for all problems. The mother of the triplets works with the Forestry Research Institute of Nigeria, Ibadan.’’

Paystack co-founder, Ezra Olubi, shares photos of the bizarre attire he rocked to a wedding ceremony

“No parent will be proud to see their daughter drop out of school to...

Church members kneel down to welcome their pastor

“No time for playing victim to get people’s pity” – Actress,...

“He demonstrated a great sense of humility” – Actor, Kenneth Okonkwo...